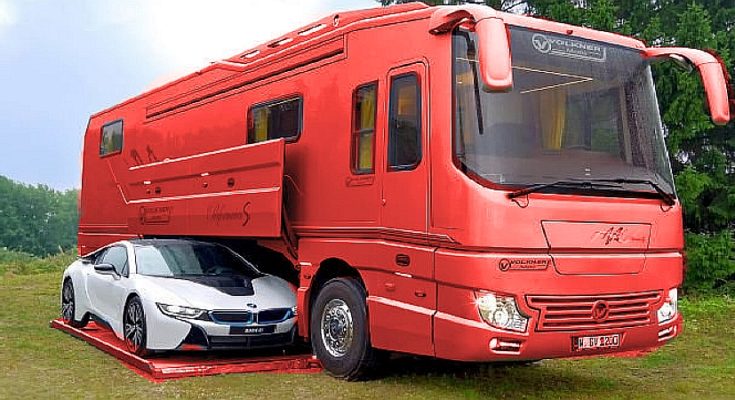 How many of you have wanted to go motorhoming in a luxury RV, and then just push a button and have your car come out the side? Even if this level of luxury motorhome hadn’t occurred to you before, now you know what some people are using to enjoy both big RV comfort and small car economy. This luxury RV is not a one-off trick vehicle but is a real production vehicle.

It’s a car-swallower RV, a type of motorhome that has been produces for around 20 years now on a significant scale. One of the first and best-known that created a minor sensation in 2008 was the German-made Volkner Mobile Performance Bus. It not only carried cars but had so many luxury features it was widely called a “Palace on Wheels.” But the trend did not end with Volkner. “Volkner began building the motorized garage into its high end Performance models in late 2006 and has now built motorhomes capable of swallowing whole Porsche 911s, Jaguar XK8 Cabriolets, BMW 6 Series Cabriolets, Maserati Quattroportes and Mercedes Sports cars,” writes GizMag at the time (which later became New Atlas).

Some observers at the time said that was almost too tame a description for the German-made Volkner Mobile Performance Bus. Here’s the interior – Click the photo to expand. 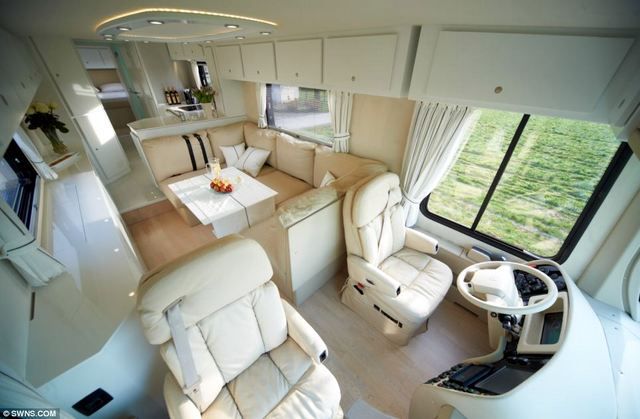 What makes this RV such a luxury machine?

—Bathrooms with massage showers equipped with several programs.
—Under-floor heating that covered even the shower floor (so no showers with cold feet…pun intended). Heated towel racks as well.
—Kitchens had real tiles, dishwaters, a large fridge-freezer, and microwaves.
—Living rooms had Bose-Dolby home Entertainment Surround Systems and a widescreen TV concealed in an entertainment cabinet when not in use.
—A computerized “Brain” pilot central computer that was said to be the result of 20 years of technology. It allowed full and automatic control of various systems including heating, energy sources such as gas and other functions.
—In addition to the extra space for the auto, Volkner Mobil had what were called “Wall Out” spaces. These increased the size of living spaces by up to 20 percent. Not exactly a new idea, but Volkner’s version was said to be stronger mechanically, among other advantages.
—A variety of décor choices.
—Seats with pneumatic cushioning.
—Storage was also not neglected. There was an 800-gallon freshwater tank, and a 158-ballon wastewater storage area. 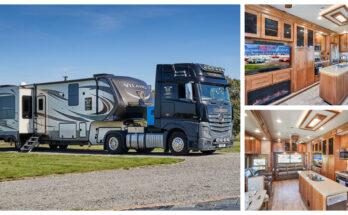 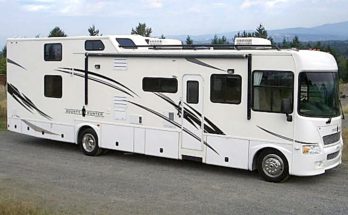 This Luxury Motorhome has a Garage 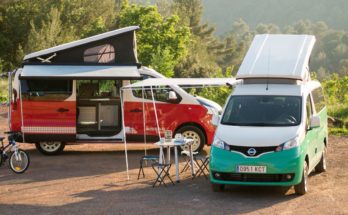 Have you Seen this New All-Electric Camper Van yet?